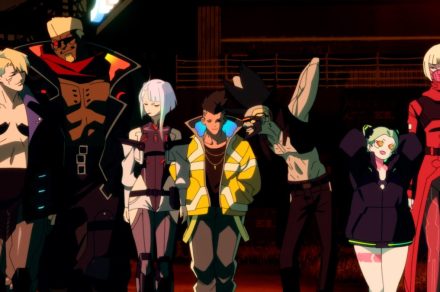 Netflix is partnering with CD Projekt Red and Studio Trigger for its upcoming anime series, Cyberpunk: Edgerunners. The 10-episode series is a spinoff from the action role-playing video game from 2020, Cyberpunk 2077.

In the trailer, the fantastic visuals and vibrant use of colors are on full display as the footage highlights Night City. David, a street kid who was nearly killed in a hit-and-run, becomes an Edgerunner, a mercenary outlaw also known as a cyberpunk. In order to survive, David joins a crew made up of fellow Edgerunners named Maine, Kiwi, Dorio, Rebecca, Pilar, and Lucy. Studio Trigger edited the trailer it is “one of the best in anime” according to Netflix.

CD Projekt Red, who developed Cyberpunk 2077, will produce the series with Rafa? Jaki serving as the showrunner. Studio Trigger, which is known for its bold and sparkling visuals, will provide the animation for the series. The animation studio has produced well-respected anime projects like Kill la Kill and Promare. Hiroyuki Imaishi, one of the co-founders of Studio Trigger, serves as the director of Cyberpunk: Edgerunners.

Netflix has been looking to add to its growing collection of original net animation (ONA). So far in 2022, the streaming service has released multiple ONAs that include Kotaro Lives Alone, Thermae Romae Novae, Vampire in the Garden, and Spriggan. Notably, Netflix released Cowboy Bebop in 2021, the live-action version of the famous Japanese anime series from 1998, and the movie in 2021. Netflix canceled the series after one season.

Cyberpunk: Edgerunners streams only on Netflix in September 2022.