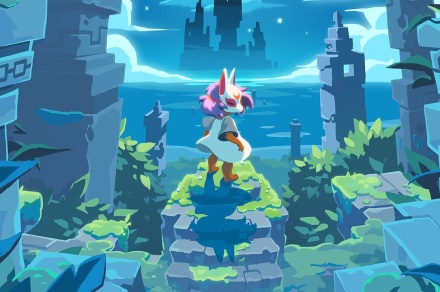 Have you ever played a new game that feels entirely fresh while simultaneously hitting a nostalgic nerve? A new game that just released but unlocks some memories of old titles you haven’t played in years?

That’s what happened to me when I tried Lucky Luna, a new mobile game that pushed me outside of my usual comfort zone. It’s the latest game available through Netflix, and while I never thought I’d never touch the streaming service’s games, I’m glad I gave this one a try. To my surprise, it brought me back to the days of some of the Nintendo DS’ most creative titles.

I have a pretty set rotation of game genres I enjoy: action games, JRPGs, and classic platformers. After not venturing outside of my sphere for a while, I started to hunger for something new. Then I saw Lucky Luna during the Netflix Game announcement block of GameSpot’s first annual Swipe Mobile Showcase. It’s a platformer that takes the usual gameplay philosophy of the genre and throws it on its head with a gimmick that feels straight out of the DSi and WiiWare era.

Lucky Luna has some sidescrolling platformer elements, but it’s mostly built around vertical exploration. During my spelunking adventure, I swipe left and right to move my character through a maze of platforms and mine shafts. I was given the optional tasks of collecting rocks that basically act as coins, finding secret tiles, and getting through the levels as quickly as possible. In addition to clearing levels normally, I tried to earn a 100% completion rate on all its levels.

All this comes together to create a platformer that feels like a cross between Pac-Man and Wario Land. It’s a simple, intuitively controlled experience that immediately hooked me as I tried to perfect my stage runs. But there’s an added twist to this vertical platformer: You can’t jump.

That simple omission is what gives the mobile game its unique flavor. Instead of jumping, you have to Goomba stomp enemies and use environmental elements like water spouts to make leaps or slow your fall. It’s such a simple concept, but…