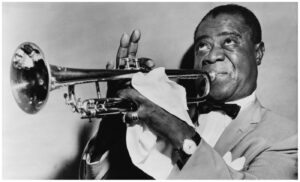 A new documentary about jazz legend Louis Armstrong includes never-before-heard recordings of the late musician speaking about the racism he endured during his career.

Louis Armstrong’s Black & Blues by filmmaker Sacha Jenkins will premiere at the Toronto International Film Festival beginning on Sept. 8 before being streamed on Apple TV+ on Oct. 28. The film is produced by Ron Howard and Brian Grazer.

On one of the recordings, Armstong talked about a time when “a white boy” told him that he loved him and had all of his records. He also told the musician that he didn’t like “negroes.”

The musician — who died at the age of 69 in 1971 — went on to say that it wasn’t uncommon for white people not to like Black people in general yet have one Black person that they did like. “They always have one that they’re just crazy about.” Armstrong reportedly began making the recordings in 1950.

The jazz musician also talked about confronting his manager over stealing his money.

“I said, ‘You might be my manager and you might be the biggest s—t and book me in the biggest places in the world… But when I get out on that… stage with that horn and get in trouble, you can’t save me.”

Ricky Riccardi from the Louis Armstrong Educational Foundation in Queens said that he hopes the documentary changes the perception of those who thought Armstrong wasn’t outspoken enough during the civil rights movement.

“I’m hoping this film blows those notions totally out of the water,” said Riccardi. “Hearing him in his own words — hearing hurt, hearing pain, hearing him curse — is going to be the first time many folks have ever experienced this side of Louis Armstrong. What’s important is that he is the one who left behind these tapes, so he really wanted this side to be known.”