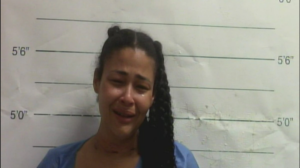 New Orleans Mother Arrested and Charged With Stabbing Her Two Children, Killing One

According to Fox 8 Live, a 4-year-old girl died, and a 2-year-old boy was left in critical condition after their mother, 31-year-old Jenee Pedesclaux, stabbed them on Sunday.

Pedesclaux posted a video clip to her Instagram wearing a tank top covered with blood. The since-deleted post shows her crying as she said, “I’m dying. My children is dead. I’m dying! I’m done with life!”

Fox 8 Live was able to retrieve a surveillance video showing a man, who they believed was the father of the two children, arriving in a white pickup truck and then running toward the house. He is seen coming back to the car with both children.

Unidentified people from the neighborhood said that the father saw the social media posts by Pedesclaux showing the children were injured and rushed over to the house. After getting to the property, he reportedly broke into the house and climbed through a front window in an attempt to rescue the children. He took both of the children to the hospital after retrieving them.

According to police authorities, the girl died at the hospital, and the young boy was admitted and listed in critical condition. Pedesclaux was arrested at the scene and taken away strapped to an ambulance gurney. The New Orleans Police Department said she was booked into the Orleans Justice Center later Sunday.

NOLA also reported that records from the courthouse show that Pedescleaux and the father of the two children, Jermaine Roberts, were recently involved in a custody battle.

Earlier this year in April, Roberts had taken Pedesclaux to court seeking joint custody that would allow him to see them on the weekends. In court documents, Roberts stated that she was not allowing him to see their children and that she was “not stable or providing a healthy environment for the kids.”

A hearing for the case was scheduled for later this month.