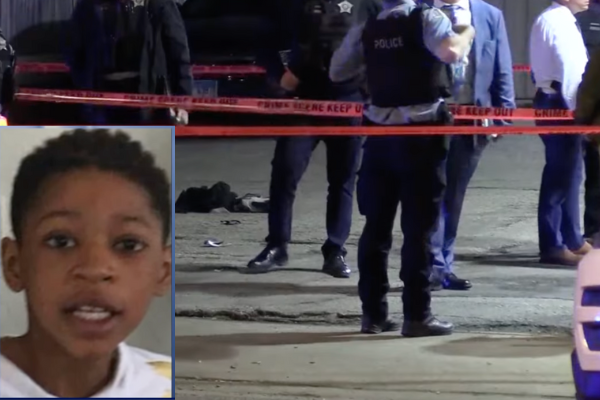 Newly Released Video Shows Chicago Police Shot 13-Year-Old Whose Hands Were Up, Failed to Render Aid and ‘Callously’ Dragged Him on the Pavement

Video has surfaced showing a Chicago Police officer shooting a teenager in his back as his hands were in the air during a pursuit in May.

The 13-year-old identified as A.G. was unarmed and followed police commands, a federal lawsuit against the city and the police officer alleges.

The video shows officers chasing the boy near the pumps at a Chicago gas station before the bullet takes him down. The officers then dragged the boy by his legs and one arm to a side of the gas station.

A unarmed 13-year-old was shoot in the back by Chicago police during a foot pursuit on May 18, 2022. (Photos: YouTube screenshots/ Fox32/WGN News)

“CPD officers did not render immediate aide to A.G., but instead callously dragged him across the pavement and then turned their attention to an uninjured officer who crashed into a sign at the gas station while arriving on scene,” read the complaint filed by the boy’s mother, Cierra Corbitt.

About a dozen officers ran in the opposite direction toward a patrol car that hit a sign. Some jumped out of other vehicles to attend to their colleagues.

CPD officials said the cops moved the boy to avoid another tragedy from a potential gasoline pump explosion.

A.G. still has a bullet lodged in his back, spinal cord injury and wounds to his esophagus, his lawyer said. He is currently in rehabilitation, learning how to walk again.

Before A.G. was involved in the foot chase with CPD on May 18, he enjoyed playing basketball and riding his mountain bike.

Authorities allege he was a passenger in a Honda Accord involved in a carjacking the day before the shooting. He reportedly jumped out of the car and ran when he saw the police.

Dennis Kenney, a John Jay College of Criminal Justice professor, said body-worn camera footage could better determine if the officer was justified in the shooting or felt he was at risk for “death…