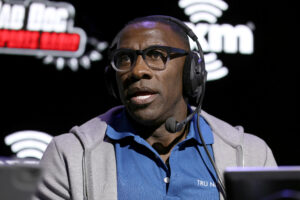 Sportscaster and NFL Hall of Fame player Shannon Sharpe recently revealed that he was involved in a life-threatening battle when he was diagnosed with prostate cancer several years ago.

As September is National Prostate Cancer Awareness Month, it is an appropriate time to talk about his fight over five years ago. He revealed the “secret” he kept from the public eye this past weekend on the latest broadcast of Fox NFL Sunday.

Today on FOX NFL Sunday, he shared his story:

Sharpe, who is one half of the team on Skip and Shannon: Undisputed, played for the Denver Broncos and the Baltimore Ravens as a tight end from1990-2003 before retiring his cleats.

He stated that he had a bout with prostate cancer in 2016. When Janssen approached him about joining the cause by participating in an initiative, Talk That Talk, which tries to encourage Black men to get screened for prostate cancer, it was the right time to share that he once had the deadly disease. Amazingly, Janssen chose the right person without knowing because he’d never disclosed that he suffered from the disease.

“At the time they asked me to do it they had no idea I had been diagnosed and treated for prostate cancer,” Sharpe said during the program on Sunday.

“There’s a 96 percent survival rate if screened early and detected early. I’m a part of that 96 percent.”

Sharpe stated that he went for early testing because his father died of the disease at 39. Being able to be tested and screened early is a decision he is happy he made. Sharpe is now in remission.

Today, the Hall of Famer posted a video to his Twitter account to encourage men to get tested.

He stated that he felt great.

“I am cancer-free right now,” he said.