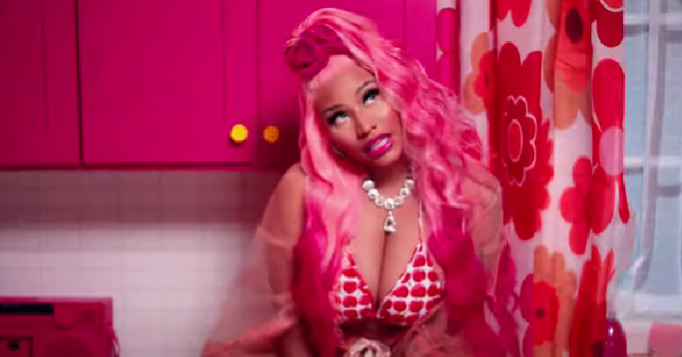 Super Freaky Girl was released on Friday, August 12, 2022, as Nicki Minaj’s first solo single in three years. Fans worldwide were eagerly awaiting the music release since the song hit the airwaves and the upcoming video was announced, especially with the mention of Vikings actor Alexander Ludwig making an appearance.

After the song made history with record-breaking sales compared to Lauren Hill’s iconic single Doo Wop (That Thing), Barbz (fans of the female rap icon) were even more ecstatic and impatient to see what more Nicki had in store.

At 2:00 P.M today, the music video premiered on her YouTube page which boasts 24.6M subscribers. The release accumulated over 98K likes and more than 10,000 comments in under an hour.

In the music video, Nicki was sporting her signature bubblegum pink (along with other shades of the colour) look with her kitchen lingerie set, the colour of her hair, and the decor throughout the video.

She got up close and personal with Ludwig as the video’s male lead, and a scene in the video shows him pulling a pink thong down her leg with his teeth before Nicki stuffs it into his mouth.

A fan reacted to the video by stating, “This was very fun to watch. 15 years in the game and she doesn’t disappoint. Four different looks, ?choreography, great set. Very proud of her and her accomplishments,” while another said, “NICKI did it tf again!!!! This video gave EVERYTHING it was supposed to! Made the wait worth it ?????.”

Watch the music video below;

RELATED: Nicki Minaj Thanks Beenie Man and Shouts Out Skeng During Vanguard Acceptance Speech at the VMAs – Watch Video