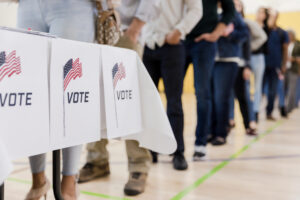 No NBA Games on Election Day; Teams Encouraged to Participate in Civic Engagement

In an effort to get more people to vote in the upcoming election, the NBA has decided not to schedule any games on Election Day.

On Tuesday, the league announced that every team will play the day before Election Day, which falls on November 8 this year.

Since this is the midterm elections, the NBA is hopeful the basketball teams will use the day off to  “encourage fans to get out and vote, plus amplify the need for civic engagement. The league is also encouraging teams to disseminate information about the election to their fan base in the weeks leading up to Election Day.

“The scheduling decision came out of the NBA family’s focus on promoting nonpartisan civic engagement and encouraging fans to make a plan to vote during midterm elections,” the NBA said earlier this week in a written statement.

Typically, the NBA only blocks out a day with no games on Thanksgiving and Christmas Eve along with the tradition of not scheduling any games during the NCAA men’s basketball championship game.

“The NBA is creating a culture of political participation, which extends not only to its athletes but to fans as well,” said Andrea Hailey, the CEO of Vote.org, in a statement released by the NBA.

Vote.org has partnered with the National Basketball Players Association on various initiatives in recent years.

“Players, coaches, event staff, and fans all deserve to have the time and space to make their voices heard at the ballot box,” Hailey continued. “The league is setting an important precedent that I hope other businesses and leagues will follow.”