BREAKING NEWS
GMT-4 04:12
Home Economics North Carolina Attorney Graduated Top of Her Class In 1924, But Was Unable to Practice Law In Her Home State. Now She’s Being Honored with a Historical Marker In the City That Once Shunned Her. 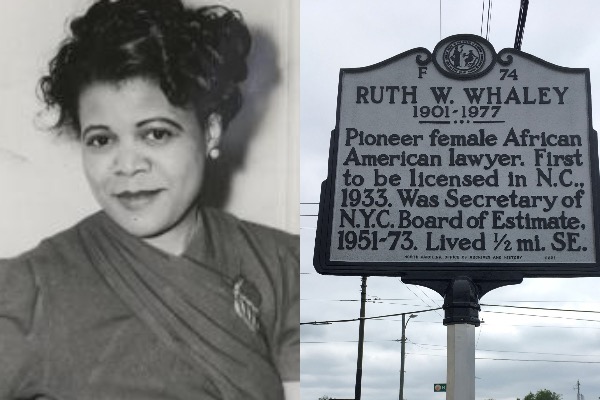 North Carolina Attorney Graduated Top of Her Class In 1924, But Was Unable to Practice Law In Her Home State. Now She’s Being Honored with a Historical Marker In the City That Once Shunned Her.

The first Black woman licensed to practice law in North Carolina had a historical maker named in her honor on a highway in her hometown, Goldsboro, on Wednesday.

Ruth Whitehead Whaley received her license to practice law in the state in 1933, but the license was ceremonial, said Ansley Wegner, the administrator of the Highway Historical Marker Program. Even though Whitehead Whaley graduated at the top of her class, she could not get past racism in the South.

“She couldn’t easily practice law here so she had to move to New York. But she still came back and went through the process and got her license here. I think that’s a real interesting side of the story,” Wegner said.

Whitehead Whaley made an academic breakthrough as the first Black woman to enroll at Fordham University in New York. In 1920, Whitehead Whaley wrote that there were only four Black female attorneys in the country. She graduated atop her class in 1924 and passed the bar exam in 1925. Seventeen lynchings of Black people were recorded that same year.

She became an expert in civil service law and made waves representing Black government workers in termination cases. Whitehead Whaley ran a private practice until 1944.

By 1949, there were fewer than 150 Black female attorneys in the country, and less than 66 percent practiced law, Whitehead Whaley wrote in her essay, “Women Lawyers Must Balk Both Color and Sex Bias.”

Whitehead Whaley wrote about the high expectations placed on her as a pioneer in the field, noting that females had to outperform their male counterparts and take the blame for their errors. Lest one of these men “forgets to be gallant in his thinking and the overlooked errors of a male colleague become the colossal blunders…