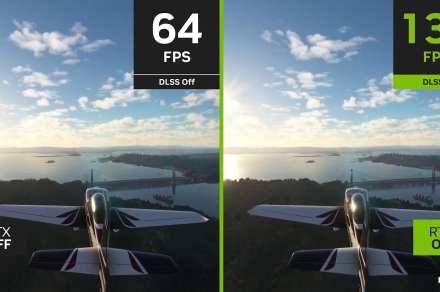 Nvidia has just announced DLSS 3, a new generation of its deep learning super sampling technology that will be available on next-gen Nvidia RTX 40-Series graphics cards.

DLSS 3 is a new AI that predicts entire frames instead of just pixels. This time around, it will even boost CPU-reliant games, and Nvidia showed off that capability in Microsoft Flight Simulator.

Nvidia introduced DLSS 3 as part of its GTC 2022 keynote, announcing the tech as part of the perks delivered by the new RTX 40-Series graphics cards. The tech has four components, including a new optical flow accelerator and game engine motion vectors. DLSS 3 processes the previous frame and the new frame and then predicts how the scene is changing. As a result, DLSS 3 generates new frames all of its own, boosting gaming performance and visuals.

Nvidia promises that DLSS 3 will be up to four times faster thanks to its ability to multiply frame rates with its new optical flow accelerator. The new tech actually bundles three different technologies into one, including the DLSS Super Resolution, DLSS Frame Generation, and Nvidia Reflex, which improves responsiveness and brings the latency down considerably. This is done by synchronizing the GPU and the CPU, and as Nvidia claims, it can reduce the latency by up to 2 times.

The company’s CEO, Jensen Huang, talked about the capabilities of DLSS 3 and described the whole process, including how the technology is able to capture pixel-level information while also utilizing game engine motion vectors in order to follow the movement and geometry in each scene. In Nvidia’s example, shown in its blog post, DLSS 3 was able to reconstruct seven-eights of the total displayed pixels, resulting in a huge performance leap.

DLSS 3 is able to boost the performance of games that traditionally rely more on the CPU than on the GPU, such as Microsoft Flight Simulator, because it allows the RTX 40-Series GPU to render the game at a much higher frame rate. Nvidia proved this by showing little clips from the game; with DLSS off, the frames per second (fps) hovered around the 65 mark, but with DLSS 3 on, the game was…