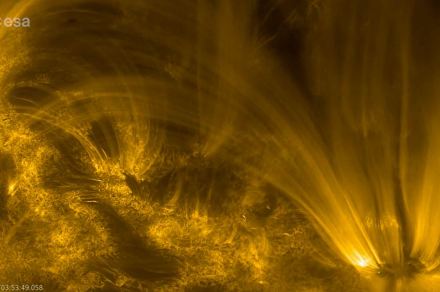 Observing activity on the sun to help predict space weather

When the Solar Orbiter spacecraft made its closest flyby of the sun to date in March this year, it scooped up vast amounts of data from which we can learn about our star. The European Space Agency, which is running the mission in collaboration with NASA, has shared a raft of material from the preliminary analysis of this data, including the highest resolution image of the sun’s south pole captured to date:

This footage was taken by Solar Orbiter’s Extreme Ultraviolet Imager (EUI) instrument on 30 March 2022, when the spacecraft had just passed its closest point to the sun so far. The sun’s poles have rarely been studied because they are hard to view, but they may be crucial to understanding the sun’s magnetic field.

Other aspects of the sun’s activities are being revealed too, like the relationship between loops of hot gas at 1 million degrees Celsius, captured by EUI, and the magnetic fields which shape them. “Nobody has ever seen the details of the corona in that much detail before, so every time we get an image down it’s the first time we see something at that much scale. And that’s really fascinating,” said the principal investigator of the EUI instrument, David Berghmans, in a video posted by ESA.

This image showing the loops of gas was captured at the same time as data from the Polarimetric and Helioseismic Imager (PHI) instrument which records magnetic activity. By comparing the two, researchers can see how the magnetic activity on the surface of the sun, called the photosphere, is driving gas into loops that reach far out from the surface and into space.

This is the process that underlies dramatic solar events like flares and coronal mass ejections, when hot plasma is sent streaming out from the sun. This in turn has effects throughout the solar system, in a phenomenon called space weather. The researchers hope that Solar Orbiter data can be used to not only understand the sun but also to predict this space weather.

“Solar Orbiter is basically a research mission, but…