BREAKING NEWS
GMT-4 11:42
Home Technology One instrument mode left and Webb will be ready for science 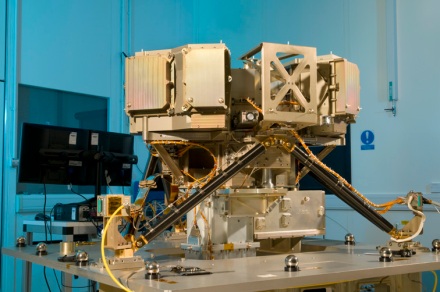 One instrument mode left and Webb will be ready for science

The countdown is on for the release of the first science images from the James Webb Space Telescope, scheduled for July 12. But before full science operations begin, each of Webb’s four instruments has to be calibrated and checked in its various modes to ensure it’s ready to collect data. This week, the Mid-Infrared instrument (MIRI) has completed its checks and NASA has announced that it is ready for science.

Unlike Webb’s other three instruments which operate in the near-infrared range, MIRI operates in the mid-infrared which means it has some peculiarities. It was the last instrument to reach its operating temperature because its silicon detectors have to be so cold to work — at a temperature of less than 7 degrees Kelvin. In order to control its temperature exactly, the MIRI instrument has both a heater and a cooler. MIRI reached its operating temperature in April this year, and since then  it ha been through an extensive calibration process and engineers have confirmed that its imaging, its low- and medium-resolution spectroscopy, and finally its coronagraphic imaging modes are all ready to go.

“We are thrilled that MIRI is now a functioning, state-of-the-art instrument with performances across all its capabilities better than expected,” said MIRI European principal investigator Gillian Wright and MIRI science lead George Rieke in a statement. “Our multinational commissioning team has done a fantastic job getting MIRI ready in the space of just a few weeks. Now we celebrate asll the people, scientists, engineers, managers, national agencies, ESA [European Space Agency], and NASA, who have made this instrument a reality as MIRI begins to explore the infrared universe in ways and to depths never achieved before.”