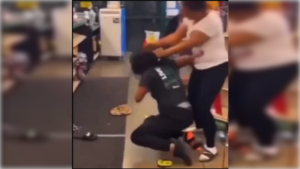 A Dayton, Ohio O’Reilly Auto Parts employee seen in a viral video on the losing end of a fight with a customer has now been arrested after she turned the tables and shot the woman assaulting her.

The auto parts store employee is seen in a shocking video firing off a weapon on a customer after the two engaged in a fist fight, WHIOTV 7 reports.

The employee later identified as 31-year-old Ke’Laron Watson is facing charges, according to police after cops responded to the brawl at the O’Reilly Auto Parts store in W. Third Street in Dayton Thursday evening.

(NOTE: The video misidentifies the event saying that it was Dollar General but it occurred at the auto parts store.)

The two women can be seen in a heated argument that escalated into a fight, with the customer seemingly getting the upper hand on the situation and pummeling the employee, repeatedly hitting her.

Once Watson gained her footing, she can be seen on the video going behind the counter, retrieving a weapon and firing off on the irate customer who fell to the floor.

Watson reportedly admitted to shooting the victim and explained that she tried to assist the woman with finding a car part “when she became upset and threatened her.”

She said the woman, “beat her about the head with her fists,” according to court documents.

Watson claimed the fired in self-defense because she feared the woman was coming back for another attack.

“She put her hands on me and she pulled my hair out and everything else. And while she was beating on me, I shot her,” Watson said according to a 911 called obtained through a public records request.

Customers who witnessed the ordeal was left confused.

“I don’t know, I’m glad I am not in that situation where I have to chose to defend myself and shoot somebody,” Enoch Bush, Jr., of…