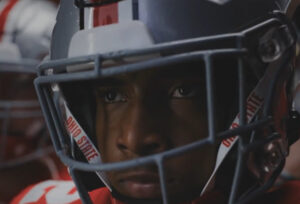 The restaurant chain Chipotle has jumped on the name, image, and likeness (NIL) bandwagon by signing Ohio State University running back TreVeyon Henderson.

His teammates, the starting offensive line for the Buckeyes, also signed an endorsement deal with Chipotle and a deal with Applebee’s.

One of the best offensive lines in the country celebrating a big W with our All-You-Can-Eat Boneless Wings! Head on into Applebee’s for the next big college game in your neighborhood! #AYCE @dawandj79 @GrindTime55 @LukeWypler @D_jack78 pic.twitter.com/Uw2CmjwKsV

Chipotle also showed off the latest clip that features Henderson.

The signing is slated to be associated with Chipotle’s Real Food for Real Athletes initiative.

“With one of our Restaurant Support Centers in Columbus’ Arena District and more than 200 locations in Ohio, we have a lot of Buckeye pride at Chipotle,” Chipotle’s chief marketing officer Chris Brandt said in a written statement.

The financial terms of the Chipotle deal were not released.