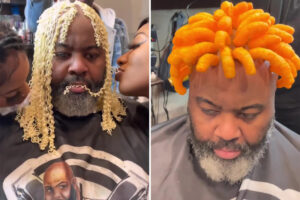 The internet is full of surprises, but it’s not everyday that you see an afro made out of Popeye’s chicken and biscuits, or a Cheetos Puff-themed short loc style. The idea straddles the line between humorous creativity and outlandish clout chasing, according to social media.

A digital creator, dubbed BMR Twins on Instagram, went viral a few months back for his outrageous, food-inspired hairstyles he would call “art work,” the New York Post reported. The content has attracted  anywhere from 5,000 likes to over 30,000 likes for the hairstyles that just keep on serving character.

One of the popular hairstyles presents what appears to be short locs made out of Cheetos Puffs. In the clip, BMR Twins shows off a nearly empty bag of the cheese puffs while showcasing his finished masterpiece on the model.

Amassing over 30,000 likes, the clip received a substantial number of comments.

“What do you do when u have the munchies??,” one Instagram user wrote.

“He better brace himself for a pigeon attack when he step outside! Lol,” one user teased.

“Clout is a hell of a drug,” another seemingly unenthusiastic user chimed in.

In another clip, BMR Twins used a pack of ramen noodles to make a bizarre faux blond, wavy locs style. Two girls appeared suddenly  in the videos, leaned in, and began taking bites out of the noodles as the stylist sprinkled seasoning over the “mane.”

He captioned his presentation, “What’s the best Ramen noodle flavor?” Rhetorical question or not, the users were more concerned about what the model looked like.

“Chick James ? I’m so lame don’t come for my rick James joke,” someone dubbed the look.

“Thought that was durk,” wrote a user who chimed in with others about the rapper Lil Durk’s resemblance.