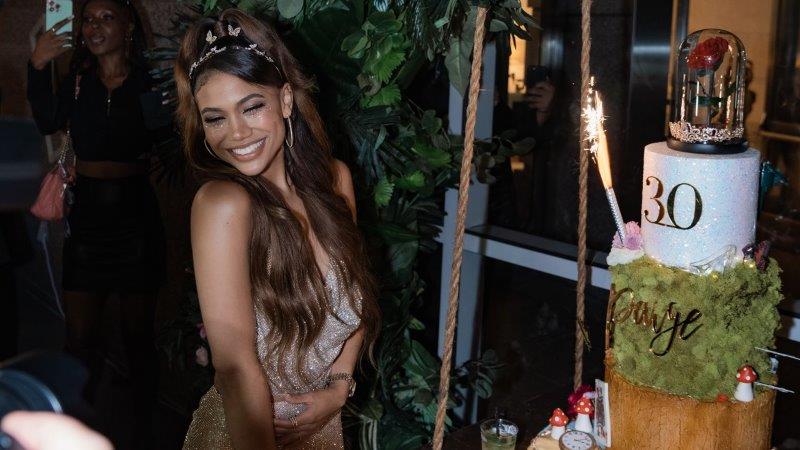 Paige Hurd welcomed in three decades of life with a Cinderella-esque birthday bash in Los Angles last weekend. Hurd was joined by a number of family, friends, colleagues and collaborators for her Enchanted-themed soirée including, Christian “King” Combs, Quincy Brown, Michael Jai and Gillian White, her God-mother, Tashera Simmons and more.

“I had family flying in from all over and same with my friends,.” Hurd said. “We danced, we sang, we drank a lil and it was exactly what I wanted. I am blessed. I’m excited for my dirty thirties!”

Planned and executed by The Meadia Agency, Cairos Custom Events and NMA PR, she was greeted with a video compilation of her life that included a heartfelt video message from friends and collaborators Lorenz Tate, Meagan Good and Ryan Destiny. Hurd was sure to honor her late Godfather, DMX with a tribute.

“It was really important for me to include him because I just wish he was here on such a milestone and because I haven’t even accepted the fact that he’s gone,” she told ESSENCE. “He’s my godfather and I’ll always love him and include him in things that are important to me for the rest of my life.”

The Power Book II actress also celebrated over 20 years within the film and television industry, where she made her debut in her childhood. Her big screen debut came in the 2003 film, Cradle To The Grave, which starred DMX.

As she enters into her next decade, she is ready to embrace it.

“People say as you get older life gets better and I think that’s what I am looking forward to in this next chapter. Growing and experiencing more of life. Never going back to my twenties. I heard the 30’s is where it’s ATTT! Adulting is no joke though lol.”