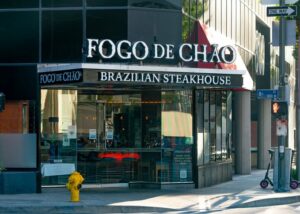 On Wednesday, Atlanta police killed a 22-year-old young man named Nygil Cullins at a Buckhead steakhouse after experiencing a mental health crisis. Quinten and Mya Cullins are both overcome with grief and anger by their son’s death at the upscale Fogo De Chao on Piedmont Road, according to Fox 5 Atlanta.

“This is an interview I would never wish on my worst enemy, but I want y’all to know something has to change,” said Mya Cullins. “I don’t want to see another mother out there struggling – and their worst fear is being killed by a cop.”

Nygil’s parents are demanding that officers are trained to become better equipped to deal with people in the community who have mental health issues.

Atlanta Police Deputy Chief Charles Hampton Jr. said the restaurant staff alerted his department about an unruly customer, according to The Atlanta-Journal Constitution.

When officers arrived at the scene, they found Nygil close to the bar and attempted to escort him off the property. However, he was uncooperative, and one of the officers decided to use a stun gun; Hampton noted that it “had a negative effect on the subject.”

Law enforcement members continued to struggle with Nygil near the restaurant’s entrance, where he attempted to leave before being struck down by a security guard. Cullins pulled out his weapon during their scuffle and fired one shot, striking the guard. The officers returned fire, and killed Cullins, said Hampton, The Atlanta-Journal Constitution reports.

The family of 22-year-old Nygil Cullins say he was the man shot and killed by an APD officer at Fogo De Chao on Wednesday.

They say their son had mental health issues, and they called 911 to get him help hours before he was shot and killed.

“And all the sudden, it started to escalate, and we started hearing noise and a lot of commotion,” recalls a witness to Fox 5.

According to Mya Cullins, she called 911 and told them that her son had bipolar schizophrenia and needed to be taken to a mental health facility.