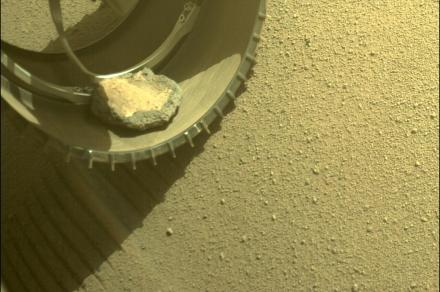 Perseverance rover picks up a rock friend on Mars

It’s a lonely life for a rover on Mars, but the Perseverance rover has some company now in addition to its helicopter buddy Ingenuity. Perseverance picked up a rock hitchhiker which has been riding in the rover’s wheel for the past four months.

Happily, the rock doesn’t seem to be doing any harm as it bounces around inside Perseverance’s wheel, though it has stayed in place for a remarkably long time given how much it must have been jostled about — especially considering Perseverance has recently been booking it across the Martian surface and breaking records for longest drive by a martian rover in a single day.

In its time with the rover, the little rock has traveled more than 5.3 miles, leading to being charmingly dubbed Perseverance pet rock. “This rock isn’t doing any damage to the wheel, but throughout its (no doubt bumpy!) journey, it has clung on and made periodic appearances in our left Hazcam images,” writes Eleni Ravanis, a student collaborator with NASA.

Rocks inside a rover’s wheels, in this case, can be considerably less dangerous than the rocks outside the wheels. The rover Curiosity suffered damage to its wheels early in its mission when the treads were torn up by sharp rocks. Eventually, the holes and tears in the wheels lead to two of the treads of one wheel breaking off completely. To prevent further damage to Curiosity’s wheels, the rover recently changed its planned course to avoid more of these sharp rocks.