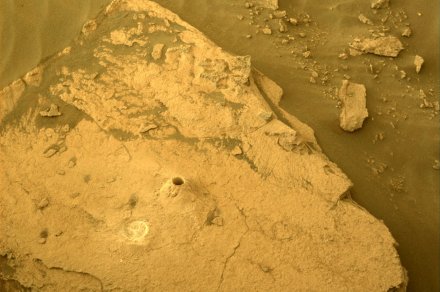 Perseverance rover scoops up a sample from the Jezero delta

NASA’s Perseverance rover recently started exploring an area of Mars called the Jezero crater delta, and this week it collected its ninth sample so far. The rock samples from the delta are particularly exciting as it is one of the most promising locations to search for evidence of ancient life, and the samples collected from this region are prime targets for future sample return missions.

The ninth Mars sample was collected on Thursday, July 9, and the NASA Perseverance team announced the successful collection of the sample on Twitter.

My team has waited years to get up close to this river delta and see what it might say about past life on Mars. This sample may well get a one-way ticket back to Earth in the future! #SamplingMars pic.twitter.com/GCQ51UzUtg

The rover arrived at the delta in the Jezero crater to begin its Delta Front Campaign in April. The area is the site of an ancient river delta which would have had water flowing there millions of years ago. There are layers of sedimentary rocks there now which Perseverance is sampling to look for evidence of ancient microbial life.

“These sediments were deposited billions of years ago, when water flowed across the surface of Mars and a river drained into the ancient crater below,” Denise Buckner explained in a NASA blog post at the time. “If Mars did host life during this time, remnants or signatures of those organisms could be preserved in some of these ancient rocks.”

The Perseverance rover has scientific tools on board like cameras and spectroscopy instruments that can analyze the composition of rocks. But collecting data in situ is only part of its mission. The other part of the rover’s job is to collect samples and seal them inside tubes, which will be left on the surface of Mars. Then future missions will be dispatched to pick up these samples, take them to an ascent vehicle, and send them into orbit and eventually back to Earth for study. This is called a sample return mission and is the next big step in…