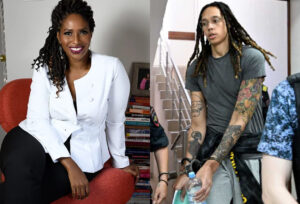 President Biden, Kamala Harris Speak With Cherelle Griner After She Calls Out Their ‘Disheartening’ Silence On Wife’s Detainment in Russia

Griner has been in detainment in Russia for over 140 days. But only now has the commander-in-chief gotten around to issuing a response to the troubled sports star who’s imprisoned in a country currently at war.

On Wednesday, Biden and Harris spoke with Griner’s wife, Cherelle, to ensure her that the Biden administration is working toward Brittney’s release from Russian detainment, WUSA9 reports.

The White House said the President and VP “spoke today with Cherelle Griner, the wife of Brittney Griner, who is wrongfully detained in Russia under intolerable circumstances.”

Biden wanted to “reassure her that he is working to secure Brittney’s release as soon as possible, as well as the release of Paul Whelan and other U.S. nationals who are wrongfully detained or held hostage in Russia and around the world,” the White House said.

“He also read her a draft of the letter the president is sending to Brittney Griner today.”

The letter and response came two days after Griner sent a handwritten letter to the White House on the 4th of July holiday expressing how terrified she is that she may be imprisoned in Russia “forever,” CBS News reports.

On Tuesday, Cherelle appeared on CBS Today where she called out the Biden administration’s seemingly slow action in getting her wife released from Russian custody.

“She is probably the strongest person that I know, so she doesn’t say words like that lightly. That means she truly is terrified that she may never see us again. You know, I share those same sentiments,” Cherelle said.

Cherelle said Brittney wrote the letter since her wife and family have had no progress with hearing back from the Biden administration amid growing calls for the White House to do more to get Griner and others returned to the U.S. Their statement came the same day Cherelle hosted a “Bring Brittney Home” rally that received major support from the public.

“It kills me every time that, you…