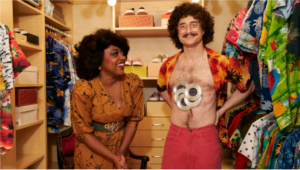 Quinta Brunson got the chance to live out her Oprah Winfrey dreams as part of the new Weird Al Yankovich biopic.

The Abbott Elementary creator was tapped to play Winfrey in Roku’s “Weird: The Al Yankovic Story,” starring Daniel Radcliffe as the popular musical parodist, Variety reports. The movie tells “the unexaggerated true story about the greatest musician of our time,” a synopsis says.

Brunson is among the star-studded cast along with Harry Potter star Radcliffe, Evan Rachel Wood as Madonna, Rainn Wilson as radio broadcaster Dr. Demento, and Julianne Nicholson and Toby Huss as Yankovic’s parents, Mary and Nick.

The movie follows Weird Al’s rise to fame with his early 80s parody hits like “Eat It” and “Like a Surgeon.” Elsewhere, the film looks inside Weird Al’s “torrid celebrity love affairs and famously depraved lifestyle.”

“From a conventional upbringing where playing the accordion was a sin, Al rebelled and made his dream of changing the words to world-renowned songs come true,” the movie’s logline states. “An instant success and sex symbol, Al lives an excessive lifestyle and pursues an infamous romance that nearly destroys him.”

Weird is set for release this fall and will be free with ads on the Roku channel. Images of Brunson and Radcliff’s portrayal come on the heels of Brunson making Emmy Award history.

At age 32, Brunson is the youngest Black woman ever nominated in the Emmys comedy acting category. She also is the first to receive three nominations in the comedy category in a single year.

Brunson’s Abbott Elementary, which she created, executive produces, and stars in, is nominated for comedy series, lead actress in a comedy, and writing for a comedy series.

“Crying shaking and throwing up has new meaning to me because I real life did all three,” she tweeted in response to the big news. “Still speechless. Congrats to the entire staff and cast of Abbott Elementary. And I want to share this moment with all of the people who watch and love the show. Emmy nominated, baby!”