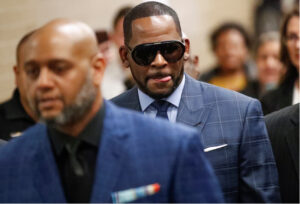 One of R. Kelly‘s die-hard fans is so determined to get the disgraced singer released from prison that he threatened to “storm” the U.S. attorney’s office in New York.

Christopher Gunn, 39, was arrested in Chicago Saturday and charged with a criminal complaint Monday for making threats involving serious bodily injury or death, the Chicago Tribune reported. A judge ordered Gunn, who also goes by the name “DeBoSki,” held in custody pending a detention hearing later this week.

Prosecutors want Gunn extradited to New York to face additional charges, The New York Post reported. If found guilty, he faces up to five years in prison. The charges comes after Gunn took to YouTube about a week after Kelly’s trial ended and showed the location of the U.S. attorney’s office in Brooklyn.

Gunn told his viewers to “get real familiar with this building” because “if Kellz [R. Kelly] goes down, everybody’s going down.”

“That’s where they work at,” Gunn reportedly said in the video.

“We’re going to storm they office …If you ain’t got the stomach for the (expletive) we ’bout to do, I’m asking that you just bail out.”

Gunn had been present for at least one day of Kelly’s racketeering trial and identified three prosecutors he threatened to “storm” with other unnamed individuals. He then showed a clip from the 1991 movie Boyz N The Hood showing a character about to be shot to death.

Kelly was convicted on racketeering and sex trafficking charges last September. The disgraced singer is due to be sentenced in federal court in Brooklyn today.