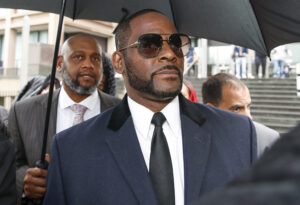 A bombshell revelation in a recently released part one of a tell-all memoir, Love and Joy of Robert, R. Kelly’s fiancée Joycelyn Savage admits she is carrying the disgraced singer’s child.

An alleged victim of the convicted sex trafficker, Savage says she wrote the book in order to clear the air and keep fans updated with the unusual romance between the pair, even as Kelly is behind bars serving his 30-year sentence for racketeering and sex trafficking.

In an upcoming tell-all book, R. Kelly’s fiancé and alleged victim, Joycelyn Savage, claims to be several months pregnant with his baby, although he has been incarcerated for over a year. pic.twitter.com/CLwprKYmCC

“The book ‘Love and Joy of Robert’ is one of the books I wrote to keep everyone up to date regarding the shadows of living with Robert,” she writes in the book description. “I went from living in a place where no one cared about my mental health to being able to live the best life I could. Taking part in this book was the first part of my experience of something I cannot ever get over, and I was able to share something Robert did not want to be known to the public, but I begged him to reveal that information to his fans.”

Savage then ends the excerpt teasing a second part to the 11-page short story release, promising to drop many more deep secrets.

“Hopefully this answers everyone’s questions and concerns. This is just part 1 of my book, part 2 will be released next year,” she explains.

The portion of the release where she says she is with child reads: “Months later, I began expecting severe morning sickness and was unsure what was wrong with my body. I thought I had contracted COVID-19, but the most amazing news of all was that I was expecting,” she wrote. “It was a happy day but an incomplete time in my life. Today I am grateful to God for giving me the most precious gift. Robert is extremely excited about the news that I am having a baby and feels sad that Robert will not be able to be here with us.”

Although Kelly has been in custody for almost a year now,…