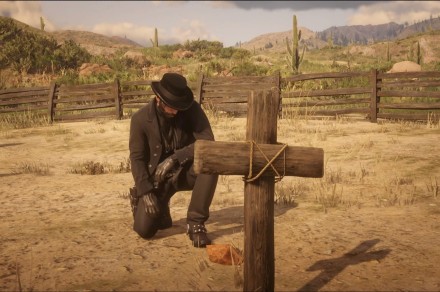 On July 13, 2021, Rockstar Games gave Red Dead Online fans new content with the Blood Money update. Since then, the community has waited patiently for more substantial updates, but received next to nothing. On Wednesday, fans declared the game deceased, inviting each other to log into the game to drink at Valentine and Blackwater Graveyard and post screenshots of their characters dressed in black and paying their respects to the game on social media.

I find quite fitting to be in an abandoned graveyard like Odd Fellow&#39;s rest as a tribute to the abandoned online @RedDeadRDC #RedDeadFuneral pic.twitter.com/zDAOvubfSU

The sorrowful gesture follows a statement Rockstar gave in a blog post last week confirming it won’t be adding new material to Red Dead Online in an effort to shift its focus to the development of Grand Theft Auto 6. It won’t be sunsetting Red Dead Online per se, but rather it will continue to support the game by building on existing material and adding new Telegram Missions in lieu of adding new story content.

“Alongside seasonal special events and experience improvements — plus other changes to enhance and maintain a healthy Red Dead Online environment — we plan to build upon existing modes and add new Telegram Missions this year, rather than…