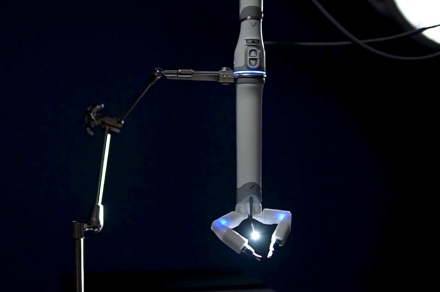 Remote surgery robot to be tested on space station

NASA is planning to send the first humans to Mars some time in the 2030s, but what happens if one of the crew suffers a serious health issue during such a lengthy mission?

Unlike the International Space Station (ISS) where an astronaut can return to Earth for emergency medical assistance in a matter of hours, voyages to deep space are an altogether different proposition.

To overcome this challenge, NASA is preparing to test a remote surgical robot called MIRA (miniaturized in vivo robotic assistant), a high-tech device comprising a main section fitted with two instrument arms that can be controlled from afar for minimally invasive surgeries.

Developed by Nebraska-based Virtual Incision with input from a team at the University of Nebraska-Lincoln, the MIRA device will be put through its paces on the ISS in 2024 to find out if it’s a viable medical tool for lengthy crewed missions to deep space. During testing aboard the orbital outpost, MIRA will operate inside an experiment locker about the size of a microwave oven and carry out procedures that mimic those used in surgery, such as cutting simulated tissue and handling small objects, the company said in a release.

Two decades in development, the robot’s light two-pound weight and small size make it attractive to surgeons and ideal for use within the confines of a relatively small spacecraft with strict weight limitations regards cargo. The accompanying remotely operated console, with its hand controls and foot pedals, gives the surgeon total control of MIRA’s instrument arms and endoscopic vision of the anatomy in real-time, with the design familiar to those working in the field today.

“The Virtual Incision MIRA platform was designed to deliver the power of a mainframe robotic-assisted surgery device in a miniaturized size, with the goal of making robotic-assisted surgery (RAS) accessible in any operating room on the planet,” said John Murphy, CEO of Virtual Incision. “Working with NASA aboard the space station will test how MIRA can make surgery accessible in even the most faraway places.”