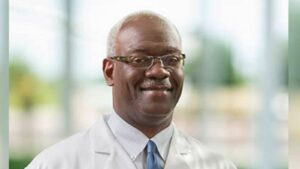 Four people died, including two doctors, after a disgruntled patient went on a shooting rampage inside a hospital in Tulsa, Oklahoma.

On Wednesday, NBC News reported that Dr. Preston Phillips, Dr. Stephanie Husen, receptionist Amanda Glenn, and a hospital patient William Love were killed in a mass shooting at Saint Francis Health System. Michael Louis, 45, had just been treated by Dr. Phillips, a respected Black doctor, hours before he returned to the hospital and opened fire.

Louis purchased an AR-15-style rifle at 2 p.m. and returned to the hospital shortly before 5 p.m. to carry out the deadly shooting. Officers also discovered the shooter bought a semi-automatic pistol from a pawnshop days before the shooting.

Louis was Phillips’ patient who underwent back surgery with the doctor on May 19.

He returned on May 24 complaining of more back pain that he “blamed” on Dr. Phillips, Tulsa Police Chief Wendell Franklin said. On Tuesday, after being treated again, Louis still complained about having pain.

Franklin says Louis carried a letter with him while performing the mass shooting, “which made it clear that he came in with the intent to kill Dr. Phillips and anyone who got in his way.”

“He blamed Dr. Phillips for the ongoing pain following the surgery,” Franklin said.

Dr. Phillips was a board-certified orthopedic surgeon specializing in spinal surgery and joint reconstruction, NY Post reports. He also worked as the team doctor for Tulsa’s former WNBA team, the Tulsa Shock, before the team moved to Dallas.

In Louis’ written letter, he vowed to kill Dr. Phillips and “anyone who got in his way.” The three additional victims are said to have stepped in front of Dr. Phillips when Louis came in with the gun.

“They stood in the way and Louis gunned them down,” Franklin said. “He began firing at anyone who was in his way.”

Louis took his own life after carrying out the mass shooting.