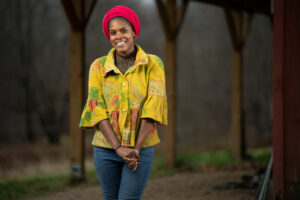 Maine State Police are investigating the hit-and-run death of a South Portland woman who was well-known for curating wellness retreats for Black youth.

In a news release, police confirmed Monday that Nicole Mokeme, 35, was struck by a vehicle on the campus of the Schoodic Education and Research Center between late Saturday and early Sunday, CBS News reported. The Center is located at Acadia National Park.

Per Press Herald, Shannon Moss, spokesperson for the Maine Department of Public Safety said that the search for the hit-and-run vehicle was still in pursuit as of Monday night. The vehicle is described as a 2016 black BMW X3 SUV with Maine license plates and is registered to Raymond Lester of Portland, police said. The BMW may have damage to its front end or underside.

Police are asking for the public’s help in locating the vehicle.

Featured by the Portland Press Herald in 2020 as a “Mainer to be Thankful For,” Mokeme offered retreats and programs that fostered integration of leadership, wellness, and innovation as the creative director of the Rise and Shine Youth Retreat. She founded the retreat in 2014 to “create a diverse community of teenage girls who courageously celebrate themselves and compassionately support one another,” per the organization’s website.

When the hit-and-run occurred, Mokeme was reportedly at the Schoodic Institute where she helped organize this past weekend’s Black Excellence Retreat 2022. The event was held as a second collaboration with the Institute and was described as “a getaway for Black folks and their friends and families of all backgrounds to join together in community to celebrate Juneteenth, liberation, and Black excellence,” according to a post on the retreat’s Instagram.

From June 14 to June 20, the retreat offered a myriad of outdoor activities for adults and youth to rest, explore, and rejuvenate. Mokeme partnered with the Racial Equity and Justice Organization and other activists in ensuring a successful week.

“She was always planning the next thing on how to bring community together to heal and build,” said Desiree Vargas,…