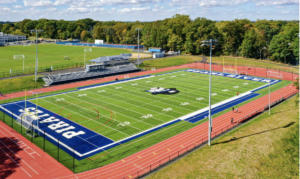 A third racist incident took place at a Pearl River, New York, school sports event within a three month span. Earlier this year it was monkey sounds, and this week on May 18, racial slurs were thrown at student athletes, reports WABC.

On Wednesday, Nyack was competing at a track meet with Pearl River in Suffern when a seventh grader from Pearl River reportedly called a Nyack Middle student the N-word.

After the student alerted coaches, the children were removed from the meet.

For the second time this year, the community is outraged that this would happen short after the racist monkey taunts, considering the school district issued a statement months ago that they would attempt to quell the racist incidents. Since April 12, the district adopted a Diversity, Equity and Inclusivity in Education policy and the creation of an equity task force.

Unsurprisingly, Superintendent Dr. Marco Pochintesta said an identical event occured when Pearl River hosted Suffern High School for a basketball game just a week before the February incident. He also admitted that two other harmful instances took place with LGBTQ+ students but have no leads for those responsible.

In a statement, Dr. Pochintesta said, “These offensive and unacceptable actions are hurtful and have led to serious consequences for those responsible. While we have identified and held accountable the students involved, I know this behavior in no way reflects the true character of our school community and we have zero tolerance for such hateful thinking.

“We are reminded that…