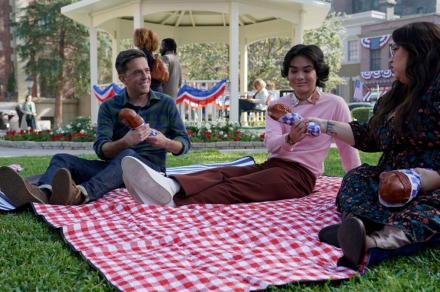 During the first season of Peacock‘s Rutherford Falls, Ed Helms’ Nathan Rutherford faced multiple crisis points as the cherished beliefs he had about himself and his town came crashing down. The town’s relationship with the local Minishonka Nation reservation was also strained, and Nathan’s close friendship with Reagan Wells (Jana Schmieding) came perilously close to dissolving. As a final straw, Nathan learned that he wasn’t even a biological Rutherford at all. That’s why Nathan left it all behind in the first season finale. But in the first trailer for Rutherford Falls season 2, Nathan is back in town.

The good news for Nathan is that he and Reagan have patched things up and appear to be best friends again. Unfortunately for both of them, this little slice of small-town life is about to get a whole lot weirder. Case in point: Reagan finds herself in a fight at a Halloween party while wearing a ketchup bottle costume. And it does not go well for her.

Rutherford Falls was created by Helms, Michael Schur, and Sierra Teller Ornelas. The second season will consist of eight episodes, and will premiere exclusively on Peacock on June 16.