BREAKING NEWS
GMT-4 02:48
Home Economics Safaree Shows Off with Workout Routine, But Fans Zoom In on His Gray Shorts 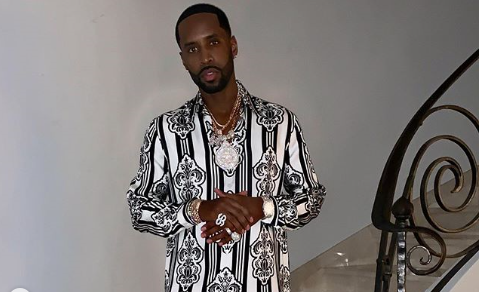 Safaree Shows Off with Workout Routine, But Fans Zoom In on His Gray Shorts

Safaree Samuels‘ package became the main attraction on May 26 after the reality star showcased his latest achievement in the gym.

In the Instagram post, Samuels, who is wearing a black shirt, gray shorts and sneakers, is seen doing various exercises as Lil Wayne’s track “John” featuring Rick Ross plays in the background.

The list included pull-ups, arms and shoulders exercises. Throughout the video, many were given a glimpse of Samuels’ print at every angle. In addition to the upload, the 40-year-old informed his followers that his latest gym visit was monumental because he could do multiple pull-ups due to his consistency.

He wrote, “I use to only be able to do 1 pull up but life is All about consistency make everyday count!!! I got something coming for yalll!!! We working.” As Samuels’ workout video began making its rounds on social media, fans’ reactions regarding the star’s print were split.

Some expressed they weren’t paying attention to his workouts, while others claimed Samuels knew what he was doing when he shared the post.

“We not worried about the pull-ups oh my.”

“Chile, I promise ain’t nobody paying attention to his workout! I promise!”

“He know we not watching him work out lol.”

“He knew what he was doing when he put those shorts on to work out.”

“Now Safaree you know exactly what you doing.”

“So we just workout with No underwear? Boy you know exactly what you doing.”

Among the previous remarks, several individuals brought up Samuels’ ex-wife Erica Mena when discussing his manhood. One wrote, “Y’all wonder why Erica be acting so crazy.”

Another said, “Safareeeee babyyyyy I see why Erica keep taking you back.”

A third social media user stated, “We understand why Erica stuck around.”

Mena and Samuels met back in 2017 after participating in the reality series “Scared Famous” and began dating a short time later. The pair got married in 2019 and…