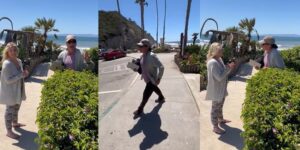 A “Karen” in Santa Barbara, California, was caught on video having a racially charged meltdown toward a Black DJ at a restaurant who filmed her losing it on a manager regarding an unpaid bill.

According to New York Post, the now-viral video was first posted to Reddit and has since attracted thousands of views and comments about the incident. Viewers can see the unsettled woman addressing  39-year-old Ian Soleimani, who is recording, as “one of four Black people in Santa Barbara.”

“Sooo this just happened @sb_boathouse, Santa Barbra needs to do better. Almost lost my s – – t,” wrote Soleimani in a separate post on the clip’s caption.

The incident took place at the Boathouse at Hendry’s Beach. An unidentified woman can be seen confronting a restaurant manager after her card was declined the night before, and she allegedly tried to pay with PayPal. Her ID was confiscated from the establishment until she returned the next day with proper payment.

The video shows the woman repeatedly asking for her ID, claiming that the bill was paid. But the restaurant manager disagreed. The woman noticed Soleimani was recording the confrontation and then unloaded her racial remarks.

“Hi, one of four Black men in Santa Barbara,” she told him. “Oh, now I’m a racist, terrible person. Oh, sorry, just because you’re an obnoxious guy. It’s not your fault that you’re Black, of course.”

“I’m against obnoxious people to be fair, not against Black people,” she continued.

The woman continued going back and forth with the manager until she shifted her attention to Soleimani again. She asked what he was doing, to which he calmly responded, “Taking a video of this. This is absolutely ridiculous.”