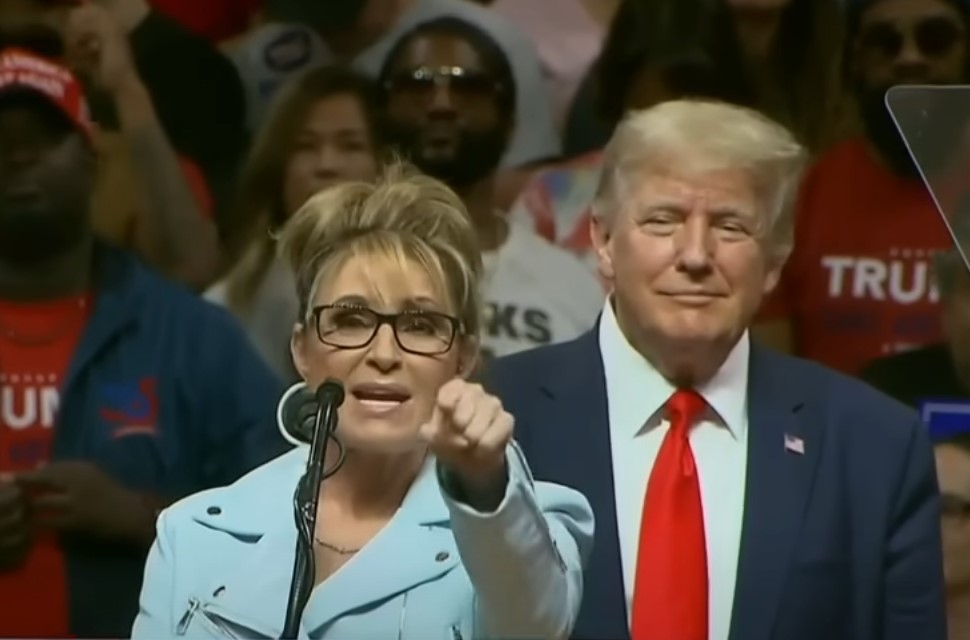 Sarah Palin uncorked a classic rant that was loaded with self-pity and topped with praise for Trump’s nearly 80-year-old testicles.

Sarah Palin has been gone from the national stage for a decade, but she pulled out all of the same classics. She claimed that the media was attacking her kids, at this point she said hi to Trig, who was a favorite prop of her 2008 run for vice president.

Palin gave herself credit for endorsing Trump early in 2016 as if her endorsement meant something. Her endorsement had so little value that the Trump campaign didn’t invite her to the Republican convention that year.

Palin’s comments were a toxic cocktail of praise for Trump and the sort of lowbrow sludge that courses through the base of the Republican Party.

Perhaps no one else will hit the low that Palin did when she praised Trump’s “balls.” Yes, the guy who was so scared of Putin that he would not so much as say boo, supposedly has massive testicles, according to Sarah Palin.

The Alaska rally was not to boost Sarah Palin’s expected to lose House special election candidacy. The rally was supposed to be for Trump to try to take out another one of the targets on his GOP enemies list, Sen. Lisa Murkowski.

Trump is out to get Murkowski because she voted to convict him at his second impeachment trial.

As our own Sarah Jones put it, the Trump/Palin appearance was a joining of purveyors or Republican toxic sludge:

Sarah Palin talking about Donald Trump’s balls. ? These two have both been the leaders of the Republican Party, which keeps finding a new populist to sell the same toxic sludge of hate, joy in cruelty, and celebration of ignorance.

Both Palin and Trump feed off and fuel the toxicity in the Republican Party, as they are symbols of what both ills and endangers the nation.

Mr. Easley is the managing editor. He is also a White House Press Pool and a Congressional correspondent for PoliticusUSA. Jason has a Bachelor’s Degree in Political Science. His graduate work focused on public policy, with a specialization in social…