BREAKING NEWS
GMT-4 07:19
Home Technology See elements as colors in galaxy where stars are being born 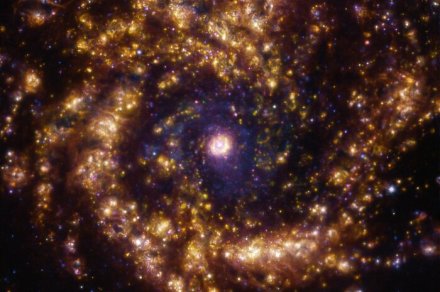 See elements as colors in galaxy where stars are being born

From Hubble to the James Webb Space Telescope, when you think of the tools that capture images of space some of the first examples that come to mind are likely to be space-based telescopes. These telescopes have the advantage of being above the water vapor in Earth’s atmosphere which can distort readings, and allows them to look out at the universe in great detail. But there are advantages of ground-based telescopes as well, such as being able to build much larger structures and to more easily upgrade these telescopes with new instruments.

One such ground-based telescope is the European Southern Observatory (ESO)’s Very Large Telescope. As the name suggests it is indeed very large, being made up of four separate telescopes each of which has an 8.2-meter (27 feet) primary mirror and which work together to look out at space in the visible light and infrared wavelengths. On the telescope named Yepun sits an instrument called MUSE, or the Multi-Unit Spectroscopic Explorer (MUSE), which uses a technology called adaptive optics to collect high-resolution data about areas of space.

An image of the spiral galaxy NGC 4303, also known as Messier 61, which is one of the largest galactic members of the Virgo Cluster. Being a so-called starburst galaxy, it has an unusually high amount of stars being born and has been used by astronomers as a laboratory to better understand the fascinating phenomena of star formation. ESO/PHANGS

ESO recently shared this image taken by the MUSE instrument, showing the stunning spiral galaxy NGC 4303. This image represents spectroscopy data which has been colorized to show different elements which are present, collected as part of the Physics at High Angular resolution in Nearby GalaxieS (PHANGS) project. This galaxy is a type called a starburst galaxy, meaning it is a site of vigorous star formation, and studying it can help us learn about how stars are born.

“Stars form when clouds of cold gas collapse,” ESO explains. “The energetic radiation from newly born stars will heat and ionize the surrounding remaining gas. The ionized gas will shine, acting as a beacon of ongoing…