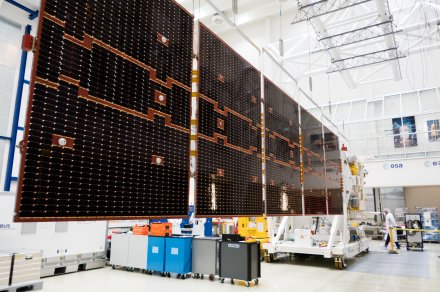 The European Space Agency (ESA) and Japanese Space Agency (JAXA) are preparing to launch a new Earth-monitoring satellite called EarthCARE which will study clouds and aerosols to see how they interact with the atmosphere and contribute to its temperature. As part of testing the satellite’s hardware before launch, the craft’s solar panel wing was recently unfurled for the first time.

EarthCARE has a large set of instruments for taking measurements, including an atmospheric lidar, a Doppler cloud radar, a multispectral imager, and a broadband radiometer. This range of instruments is necessary to understand the complex relationship between clouds, aerosols, radiation, and climate change. But this many instruments require a lot of power, hence why the satellite is also equipped with a huge five-panel solar wing.

One of the first tests of ESA’s EarthCARE satellite involved the deployment of the satellite’s 11-meter solar wing from its folded stowed configuration, which allows it to fit in the rocket fairing, to its fully deployed configuration as it will be in orbit around Earth. The photograph shows the wing fully deployed. ESA–M. Cowan

At 11 meters (36 feet) long, the wing has to be folded up to fit inside the nosecone of the rocket which will launch the satellite from Earth and into orbit. To test this folding and unfolding process, the wing has now been deployed fully for the first time at an ESA testing facility in the Netherlands.

“We are extremely happy to say that the solar wing deployment test went very well. The timely and complete deployment of the large solar wing soon after launch is crucial to the mission,” said ESA’s Mehrdad Rezazad. “Since we have to deal with gravity on the ground, the separate panels were supported by wires for the test. In orbit the ties, holding the five panels together during the launch configuration, will be automatically sliced open by a set of thermal knives, releasing the folded wing so that it can deploy fully behind the satellite platform.”

You can also see video of the wing unfolding, shared by ESA:

The launch of EarthCARE is scheduled for…