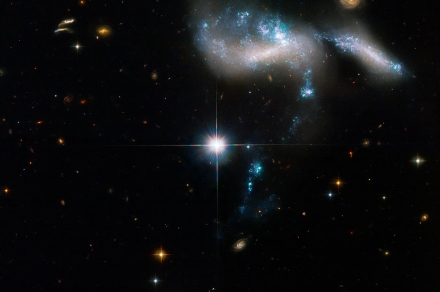 See four dwarf galaxies merging into one in Hubble image

See four dwarf galaxies are merging into one in Hubble image

An image from the Hubble Space Telescope shared this week by NASA shows an unusual interaction of four dwarf galaxies. There are two small galaxies which are so close together that they look like one object, called NGC 1741, located at the top of the image. Then there is another cigar-shaped galaxy close by to the right, and a fourth galaxy in the bottom left which is connected to the other three by a stream of young stars.

Together, the four galaxies make up a set called the Hickson Compact Group 31, or HCG 31. The group is located 166 million light-years away from Earth, which is relatively close for seeing interacting dwarf galaxies. The galaxies are currently so close together, at within 75,000 light-years of each other, that all four of them would fit within the Milky Way.

This image is a revised version of an image originally released in 2010, which has been processed to bring out the star-forming regions in the group. As gravitational forces from the mass of the galaxies interact, this spurs the formation of stars, which glow blue when they are young.

Dwarf galaxy mergers are typically seen very far away, meaning they are very old, but this group is comparatively young. Astronomers were able to use the data from Hubble to wind back their positions and see when the galaxies started interacting, a few hundred million years ago, and predict when they will eventually merge.

“This is a clear example of a group of galaxies on their way toward a merger because there is so much gas that is going to mix everything up,” said lead author of the study, Sarah Gallagher, in a statement when the image was released.

“The galaxies are relatively small, comparable in size to the Large Magellanic Cloud, a satellite galaxy of our Milky Way. Their velocities, measured from previous studies, show that they are moving very slowly relative to each other, just 134,000 miles an hour…