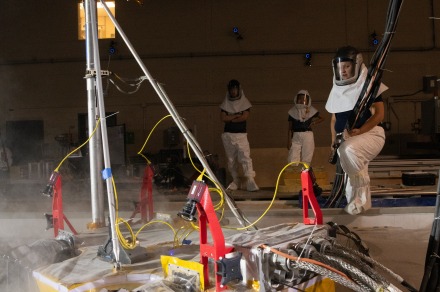 The moon is no easy place for a little rover to explore — from its sharp, glass-like dust which rips up components to the pockmarks and craters which cover its surface and which a rover has to maneuver over, it’s a challenging place to move around. To make sure its upcoming VIPER rover is ready for the challenges of the lunar environment, NASA has been putting the rover through its paces with testing in a moon-like obstacle course here on Earth.

The aim of the VIPER rover is to search out key resources for future crewed missions to the moon, in particular water ice. Focusing around the moon’s south pole, the rover will hunt for water ice ahead of planned crewed missions under the Artemis program.

The mission had been planned for launch in November 2023, but this date has been pushed back to November 2024 to give more time for testing. This testing includes challenges for the rover like facing “quicksand-like soil” and maneuvering around tilts, boulders, and craters.

On NASA’s website, you can see video footage of the rover in action, including facing a dusty pit and steep slopes at a testing facility at NASA’s Glenn Research Center in Cleveland which simulate the lunar environment.

“We wanted to see if the rover is capable of moving forward in an extreme sinkage environment, and how much slower VIPER might drive or how much additional power the rover would use because of tricky soil conditions,” said Mercedes Herreras-Martinez, VIPER risk manager and mission systems engineering technical interchange lead, in a statement.

From these tests, the engineers can see how the rover will perform on the moon and whether it will be able to get itself unstuck if it finds itself in a tricky environment. This helps the team prepare for what happens if the rover hits an unexpected obstacle or issue.