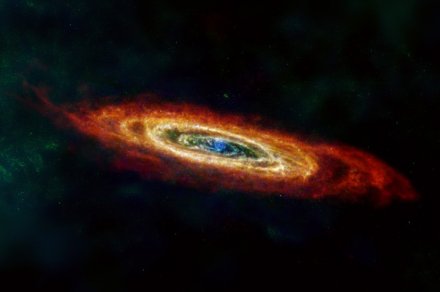 See our galactic neighbors as you’ve never seen them before

Dust was long considered the bane of astronomers, blocking off light and hiding away objects they wanted to observe. But with the advent of infrared astronomy, researchers found that dust is not a dull curtain, but rather an active and essential ingredient for the way that galaxies evolve.

In recent decades astronomers have come to see dust as a source of scientific discovery and, as demonstrated by a set of images recently released by Hubble scientists, it can be strikingly beautiful as well.

The Large Magellanic Cloud (LMC) is a satellite of the Milky Way, containing about 30 billion stars. Seen here in a far-infrared and radio view, the LMC’s cool and warm dust are shown in green and blue, respectively, with hydrogen gas in red. ESA/NASA/JPL-Caltech/CSIRO/C. Clark (STScI)

Researchers have used data from four telescopes no longer operating — the European Space Agency’s Herschel Space Observatory and Planck observatory, and NASA’s the Infrared Astronomical Satellite and Cosmic Background Explorer — to create images of four nearby galaxies to the Milky Way. The images show the dust in and around these galaxies in all its glory, color-coded to show cool dust in green and warm dust in blue, with hydrogen gas in red.

The Andromeda galaxy, or M31, is shown here in far-infrared and radio wavelengths of light. Some of the hydrogen gas (red) that traces the edge of Andromeda’s disc was pulled in from intergalactic space, and some was torn away from galaxies that merged with Andromeda far in the past. ESA/NASA/JPL-Caltech/GBT/WSRT/IRAM/C. Clark (STScI)

The four galaxies pictured are the Large and Small Magellanic Clouds (two dwarf galaxies orbiting the Milky Way), plus the nearby Andromeda and Triangulum galaxies. The images show how the density of dust varies within these galaxies, as it is thrown off by exploding stars and blown around by stellar winds.

The Small Magellanic Cloud is a satellite of the Milky Way, containing about 3 billion stars. This far-infrared and radio view of it shows the cool (green) and warm (blue) dust, as well as the hydrogen gas (red)….