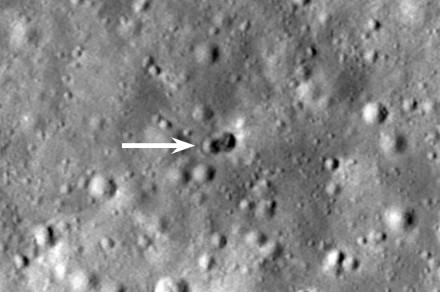 Earlier this year, a Chinese rocket booster crashed into the lunar surface in a rare example of a piece of human-made debris colliding with the moon. Now, the site of this crash has been imaged by NASA’s Lunar Reconnaissance Orbiter, showing the crater created by the impact.

The impactor was originally thought to be a piece of SpaceX hardware, but further investigation showed it was actually the booster from a Long March 3C rocket. The rocket was launched as part of China’s Chang’e 5 mission in 2014, and although Chinese officials denied the booster belonged to them, evidence of the composition of the object suggested it was indeed part of a Chinese rocket.

This image, taken by the Lunar Reconnaissance Orbiter, has been enlarged by three times to show the impact location of the booster, near the Hertzsprung crater.

In an unexpected twist, the impact actually created two craters smushed together — one 18 meters across and the other 16 meters across. This unusual configuration hasn’t been seen in previous rocket impacts on the moon, such as those craters created when rocket upper stages were deliberately impacted into the moon during the Apollo missions.

The crater formed (5.226 degrees north, 234.486 degrees east, 1,863 meters elevation) in a complex area where the impact of ejecta from the Orientale basin event overlies the degraded northeast rim of Hertzsprung basin (536 kilometers diameter). The new crater is not visible in this view, but its location is indicated by the white arrow. LROC WAC mosaic,…