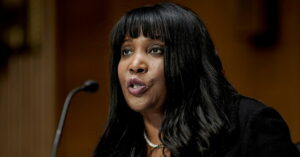 Posted By: adminon: May 11, 2022In: EconomicsNo Comments
Print Email

The Hill reports senators voted 50-50 along party lines on Cook’s confirmation, with Harris casting the tie-breaking vote. The confirmation makes Cook the first Black woman to serve as governor of the Fed Board.

Cook previously served as a White House Council of Economic Advisors member during the Obama administration. She also serves on the executive committee of the American Economic Association. Cook’s confirmation makes her President Joe Biden‘s second-confirmed Fed nominee and his first addition to the Fed Board.

Biden was urged to nominate Cook by Democratic lawmakers and liberal policy groups as soon as he clinched the presidential election. One of Cook’s most prominent supporters is former Fed Chairman Ben Bernanke, who cited her groundbreaking research into the economic effects of racism and deep knowledge of economic history that would bring a fresh perspective to the central bank.

“We know that she understands how economic policy affects all kinds of different people in different parts of the country — from the rural South where she grew up to the industrial Midwest, where she built her career,” Sen. Sherrod Brown (D-Ohio) said in a statement.

Cook’s supporters also touted her deep knowledge of global financial stability issues as the Fed continues to deal with the economic effects of the COVID-19 pandemic. In addition to the inflation rate being at its highest in four decades, supply chain issues have not subsided, gas prices will continue rising, and many expect the U.S. to hit a recession within the next 12 to 18 months, making Cook’s appointment even more important.

Republicans pushed back, citing Cook’s limited academic focus on monetary economics and politically charged tweets in their arguments that she was unqualified for the Fed Board.