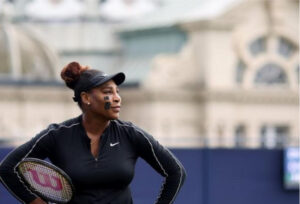 Don’t call it a comeback because it’s Serena Williams we’re talking about! In preparation for Wimbledon, the decorated tennis champion added two more wins to her long list of victories.

On Tuesday, Williams and her partner Ons Jabeur triumphed over Sara Sorribes Tormo and Marie Bouzková, 2-6, 6-3, 13-11, at Eastbourne, Forbes reports. Together, Williams and Jabeur advanced to Wednesday’s quarterfinals against Shuko Aoyama and Chan Hao-ching.

“Oh my God, it was so fun to play with Ons,” Williams said at Eastbourne.

“It was great; we had a lot of fun. Our opponents played amazing; we were just trying to stay in there after the first set.”

It was a big match for Williams ahead of the start of Wimbledon next week. The 23 Grand Slam title holder hasn’t competed since Wimbledon 2021, where she suffered a leg injury that kept her out the rest of the year.

Fans recall watching Williams limp out of the arena in tears in the first round against Aliaksandra Sasnovich, Times of India reports. But, scoring two wins just days ahead of the draw for Wimbledon on Friday puts the pressure on Williams’ competitors, who will want to see an unseeded Serena in their section of the draw.

Viewers say Williams appeared a little rusty at the start of the game but remained steady and focused on the goal at hand. Serena is now No. 1,204 in the world in singles and, while unranked in doubles, has 14 career Grand Slam doubles titles.

Jabeur “couldn’t believe” Williams chose to partner with her for the feat. Now, the teammates will get at least one more doubles match before they both play singles at Wimbledon.

Upon the draw on Friday, everyone will be watching to see where Williams lands. The 40-year-old mom has the fifth shortest odds of winning Wimbledon, with the world’s current No. 1 player, Iga ?wi?tek, being the top contender.