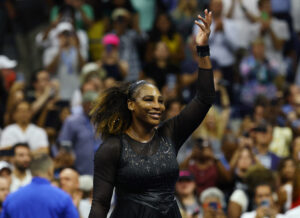 Twenty-three-time Grand Slam winner Serena Williams gave a classy response after a reporter asked her if she was surprised by her performance at the U.S. Open on Aug. 31 in New York.

Williams announced that she was retiring from tennis sometime after the tournament during an interview with Vogue on Aug. 9. The four-time Olympic gold medalist beat Estonian Anett Kontaveit, the world’s second-best-ranked player, to advance to the third round of the tournament on Wednesday.

After the big win, Williams was asked by a reporter if she was surprised by the win. “Are you surprised at yourself? With your level at the moment?”

Williams gave the reporter a look that seemingly said she was not surprised before she replied.

“I mean…I’m just Serena, you know”

The crowd at the Arthur Ashe Stadium cheered following her response.  She added nonchalantly that she was “a pretty good player” before adding that she loves to rise to the challenge. Williams also credited the crowd for their support. The Twitter account for the U.S. Open shared clips of the exchange.

“Serena, surprised at her level?”

Serena, surprised at her level? ? pic.twitter.com/QP41An73FE

Williams also shared the news of her upcoming retirement on Instagram with a caption noting she planned to evolve and concentrate on being a mother.

“Vogue. September issue Cover. There comes a time in life when we have to decide to move in a different direction. That time is always hard when you love something so much. My goodness do I enjoy tennis. But now, the countdown has begun. I have to focus on being a mom, my spiritual goals and finally discovering a different, but just exciting Serena. I’m gonna relish these next few weeks. ?”

Williams, 40, also said after the match that she was trying to enjoy the moment in what could be her last tournament.

“I think I’ve mostly been kind of blocking everything out,” she said, “but then at the…