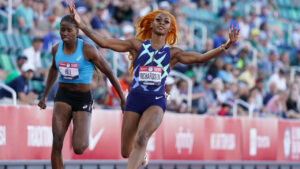 Sprinter Sha’Carri Richardson has been generating headlines lately as she makes her way back up to the top. But, the runner is not happy that the USATF (USA Track & Field), the sports governing body, is using her name, likeness, and image when promoting upcoming events.

Last month, in her first race of the season, Richardson won the 2022 Duval County Challenge American Track League with a time of 11.27 seconds. Although she clocked a better time in her most recent competition, she came in second place, losing out to Elaine Thompson-Herah, who achieved a 10.79 clocked time to win the race. Richardson came in slightly behind Thompson-Herah while barely crossing the line ahead of Shericka Jackson at the finish as both sprinters came in at 10.92.

As she prepares for her next race, which will be on Sunday, June 12, she is upset that the USATF is promoting her next appearance. USATF was promoting an upcoming track meet that stated that Gabby Thomas would be going up against Richardson.

The post didn’t sit well with Richardson, and she responded by writing, “Stop posting my name & image for clickbait.”

This caught Twitter fans by surprise as some came to her defense while many didn’t understand why she had a beef with the organization promoting one of their well-known athletes via social media.

When you poppin that’s what they do! Keep grinding babe! Don’t let the distraction fog your mind.

Sorry dear, as long as you’re running in sanctioned events and are a member, they have the rights to both.

Genuine question, how is this clickbait? If it’s a race you’re going to be in and they are selling tickets to…