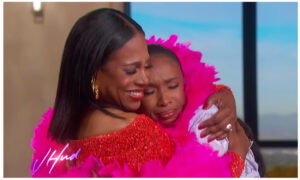 The Abbot Elementary star was the first actress to play Deena Jones in the Broadway musical in 1981 and received a Tony nomination for her performance. Jennifer Hudson starred in the film version of Dreamgirls in 2006 as Effie White and won an Oscar for Best Supporting Actress at the 2007 Academy Awards.

Hudson asked Ralph about her audition for the musical and Ralph recalled auditioning with actress Loretta Divine in New York City.

“These women in the room were not singers, they were sangers, baby… the building was literally levitating off of the concrete,” she recalled. “That’s how wonderful they were. And then there was me.”

Ralph went on to say that she was surprised to get the role and gave Hudson a short choreography lesson as they donned hot-pink feather boas for the audience.

“I don’t know if I can keep up,” exclaimed Hudson. “Yeah, you can,” Ralph assured her.

“I’m following your lead,” added Hudson. “You’re the original Dreamgirl, baby, not me.”

“All you have to remember, okay, when you move, and you know this… You want them to see that you’re wonderful, that you love being here on stage, come on.” Ralph said as Hudson began to sing the chorus from Dreamgirls.

Ralph continued with her direction as she swayed side to side. “Now make it sway, and you look at them, look up. That’s right, sing, baby!”

The ladies embraced at the end of the performance before Ralph congratulated Hudson on her success.

“Thank you,” cried Hudson. “She’s amazing. I can’t believe I just got to have that moment with you. That was a dream. She’s a dream!”