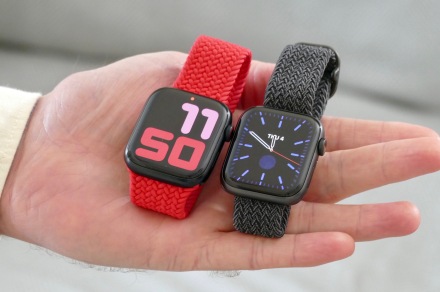 While fitness bands have sold in greater numbers than smartwatches in the past, recent research shows things are changing. Counterpoint Research’s latest report shows the global smartwatch market grew by 13% year-over-year (YoY) during the first three months of 2022, yet according to a Canalys report, during the same period of time fitness band shipments fell by 37%.

Canalys goes on to state that smartwatches — which include basic versions and more complex models — have made up 76% of all wearable shipments so far this year. Meanwhile, fitness bands have been declining for a while. This is the sixth consecutive quarter where shipments have fallen, according the Canalys data, falling to less than 10 million after peaking at 27.9 million units at the end of 2019.

According to Canalys Research Analyst Sherry Jin, people are buying smartwatches over fitness bands because they offer bigger displays, long battery life, and richer features. Apple holds the top spot with the Watch Series 7 outselling other wearables. The company sold 14% more smartwatches between January and March this year than during the same period in 2021. The Galaxy Watch 4 is the most popular WearOS product, and it helped Samsung grow 46% YoY.

Elsewhere in the report, Huawei led the basic smartwatch segment with a 7.2% market share, according to Counterpoint Research. However, its growth trajectory remained flat. It was followed by Xiaomi, which registered 69% YoY growth by selling most of its wearables under $100. Amazfit retained the sixth spot in the number of smartwatch shipments.

Google is all set to ride the wave of interest in smartwatches with the launch of its Pixel Watch later this year, and that may lead to another decline in fitness bands. It will be the first smartwatch to benefit from Fitbit integration, since Google acquired the company several years ago. Fitbit made its name with fitness bands, but has subsequently gone on to produce hybrid devices like the Versa 3. Now that its software is expected on a full smartwatch too, interest in fitness bands may fall even further as the year goes on.