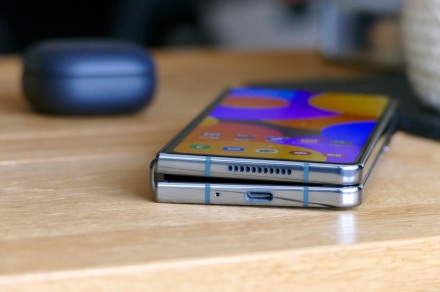 The Galaxy Z Fold 4 was revealed earlier this month with Samsung promising that it can outlast 200,000 folds, but that wasn’t the case for one customer. Posted to Reddit, user u/Merzo1290 shared an image of their brand-new Fold 4 that had broken just five hours after picking it up. According to the poster, they opened the Fold 4 a single time, heard a snap, and saw a devastating crack straight down the middle on the hinge.

The broken Fold 4 was at least able to call a local Samsung support center, so it wasn’t entirely useless after the break. As many have echoed in the comments section, this scenario is the fear of every device owner. Luckily, the problem seems to have been identified as an issue regarding defective UTG (ultra-thin glass). While obviously not ideal, fans can take a little bit of comfort in the fact that it’s not a new issue for Samsung foldables, so it’s easy to identify. And looking at similar reports with the Fold 2 and Fold 3, these incidents are usually only seen with a small minority of devices.

One commenter points out that the issue has been present since the Z Fold 2 but seems only to affect less than five percent of all devices, based on previous polls in the Galaxy Fold subreddit. While that number is far from an official report, it can give potential buyers an idea of what to expect when unboxing their Galaxy Z Fold 4 for the first time. Five percent is certainly a small fraction of users experiencing the issue, but it does mean that opening a new device only to find it broken isn’t impossible.

It’s for this reason that many urge Z Fold buyers to spend the extra cash upon purchase to be insured with Samsung Care Plus, Samsung’s official device insurance. Without it, someone with a faulty device may be out of luck depending on how exactly it breaks and other warranty information.

While the idea of a unit breaking the moment you lay your hands on it is certainly worrying, it’s good to know that both the Flip 4 and Fold 4 come with a one-year limited warranty that covers faulty hardware in the U.S. This means that, should a similar incident with…