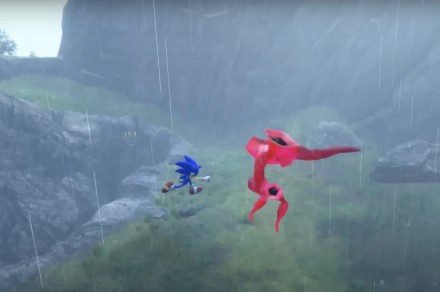 Sonic the Hedgehog fans got another treat from IGN as it showed off the combat gameplay for Sonic Frontiers. This time around, the Blue Blur is throwing more kicks, punches, and so much more as he crosses paths with highly advanced robots and other enemies native to Starfall Island.

The latest six-minute gameplay video shows Sonic kicking enemies up close and personal as well as doling out wind-kicking attacks from a short distance. He also dashes through the air in different directions trying to home in his opponents before pummeling them even further, and performs an upside-down kick spin, sending him up 20 feet off the ground before coming back down.

For heavy-duty enemies, Sonic draws a circle with the cybernetic blue and pink trail to blow their shields off and attack them before they’re protected again. He also draws circles around a group of smaller enemies, sending them flying before Sonic beats them down. And once the enemies are defeated, blue diamond chips fall out to increase the gauge of Sonic’s cybernetic effect.

Sonic’s new combat mechanics are put to the test when he battles a leviathan robot whose pulse barricades increase with each tentacle Sonic knocks out. The blue pulse barricades boost Sonic’s speed upward along the tentacle while the red ones repel him.

Noticeably absent are Sonic’s classic attacks, like the spin dash and homing attacks. That’s no surprise, given Sonic Teams’ tendency to experiment with new gameplay mechanics for every Sonic game.

More Sonic Frontiers info will be revealed during Summer Games Fest next week. Make sure to keep it here for Digital Trends’ Summer Gaming Marathon.