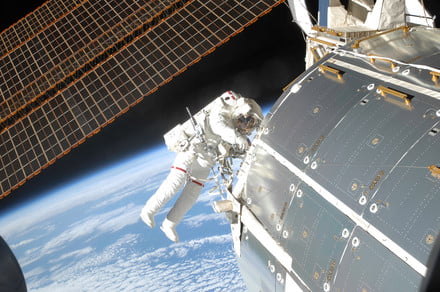 NASA has announced it is suspending non-emergency spacewalks aboard the International Space Station (ISS) while it investigates what caused water to leak into an astronaut’s helmet during a walk in March.

“Until we understand better what the causal factors might have been during the last [spacewalk] with our [spacesuits], we are no-go for nominal [spacewalks],” Dana Weigel, deputy manager of the ISS program, said this week.

Weigel added that it was important for NASA to “address and rule out major system failure modes” regarding the recent incident.

The spacewalk in question — conducted by NASA astronaut Raja Chari and European Space Agency astronaut Matthias Maurer — took place outside the ISS on March 23. Once Maurer was back inside the station’s airlock at the end of the seven-hour excursion, water was found to be pooling inside Maurer’s helmet. An initial investigation revealed that up to 50% of the visor had been coated in water, with more found in an absorption pad at the rear of his space helmet.

Maurer’s case wasn’t considered an emergency situation at the time, but it had alarming echoes of a more serious, life-threatening episode at the space station in 2013. And for that reason, NASA is not taking any chances.

It involved Italian astronaut Luca Parmitano, who came close to drowning during a spacewalk when his helmet began to take in water.

Parmitano later said that while working outside the station, blobs of water began to get into his nose, mouth, and eyes, hindering his ability to clearly view his surroundings. But most concerning of all, the accumulation of liquid began to adversely impact his breathing.

Despite poor vision and breathing problems, Parmitano remained calm and carefully made his way back to the airlock and safety. In his case, the issue was put down to a contaminated fan pump inside the spacesuit.

Such incidents during spacewalks are thankfully rare, and to date no astronaut has died or been badly injured during several hundred excursions outside the station since it went into operation more than two decades ago.

For more on spacewalks, check out this…