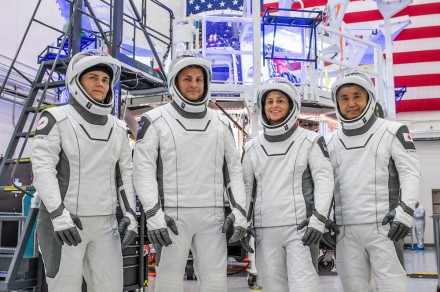 The approaching tropical storm, which forecasters say could become a hurricane on Monday, has already forced the space agency to ditch a potential launch opportunity for its next-generation SLS rocket on Tuesday, September 27. It’s now trying to establish whether the enormous rocket needs to be rolled off the launchpad and back into the Vehicle Assembly Building four miles away to protect it from the incoming wind and rain.

On top of that, Storm Ian has also interrupted preparations for SpaceX’s Crew-5 mission to the space station. The troubling weather forecast has prompted the mission team to postpone plans to bring the crew to the Kennedy Space Center on Monday, September 26.

With NASA yet to decide a new date for their arrival, its current target launch date of Monday, October 3, could slip.

“NASA and SpaceX’s Crew-5 astronaut arrival to the agency’s Kennedy Space Center in Florida has been delayed as mission teams monitor Tropical Storm Ian,” NASA said in a tweet, adding that a new arrival date will be announced in the coming days.

Update: @NASA’s @SpaceX Crew-5 astronaut arrival to the agency’s Kennedy Space Center in Florida has been delayed as mission teams monitor Tropical Storm Ian. A new crew arrival date will be set in the coming days.

As part of Crew-5, NASA astronauts Nicole Mann and Josh Cassada, together with Koichi Wakata of JAXA (Japan Aerospace Exploration Agency), and Anna Kikina of Russia’s Roscosmos space agency, will spend about six months aboard the orbital outpost, working on science and technology demonstrations as well as performing maintenance and upgrade activities.

For Mann, Cassada, and Kikina, this will be their first ride to space. Wakata, meanwhile, has already been on four orbital missions. The first took place in 1996, while the most recent voyage was in 2013. The…