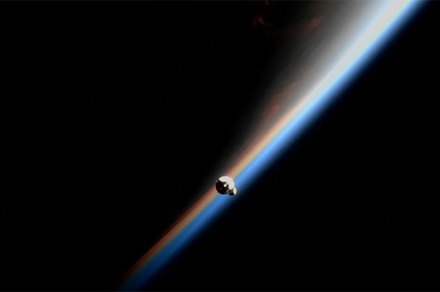 An uncrewed SpaceX Dragon cargo ship has arrived at the International Space Station (ISS), carrying a variety of scientific experiments and supplies for the crew. The Dragon craft was launched on Thursday, July 14, at 8:44 p.m. ET from Launch Complex 39A at NASA’s Kennedy Space Center in Florida, carrying 5,800 pounds of cargo.

The Dragon traveled throughout Thursday night, through Friday, and arrived to dock at the Harmony module on the ISS on Saturday morning at 11:21 a.m. ET. The automated docking procedure was overseen by two current members of the ISS crew, NASA’s Bob Hines and Jessica Watkins.

The SpaceX Dragon resupply ship approaches the space station during an orbital sunrise above the Pacific Ocean. NASA TV

There were some especially stunning views of the Dragon craft approaching the ISS during orbital sunrise, which is when the sun can be seen rising over the curvature of the Earth from space. Because of the way the ISS orbits, the crew members there see an average of 16 orbital sunrises and sunsets per 24 hours period.

Video footage shared on Twitter by Chris Bergin of NASASpaceFlight shows a timelapse of the Dragon craft visible against the sunrise peeking out over the curve of the planet:

Entering the KOS (Keep Out Sphere). The ISS version of opening the front gate.

And this is pretty (timelapsed it). pic.twitter.com/TNZo239LKU

This was the 25th resupply mission to the space station launched by SpaceX, and it is the third time that this particular craft has traveled to the ISS. The Dragon will now remain docked at the ISS for a further month. Then it will be filled back up with research results and returned to Earth.

The experiments flying to the station this weekend included a variety of scientific topics, covering human biology to materials science. And there will be food for the crew too, including fresh fruits and vegetables which are a rare treat for those who have to live mostly on pre-packaged food. According to SpaceFlightNow, the food received by the crew includes apples, oranges, cherry tomatoes, onions, baby…