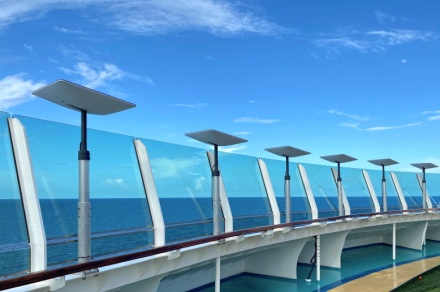 Royal Caribbean said Starlink will bring “faster and more reliable internet” to its fleet of ships, which also include those operated by Celebrity Cruises and Silversea Cruises.

The cruise operator is the first in the industry to partner with SpaceX for its high-speed, low-latency broadband service.

Following a successful trial of Starlink internet aboard the Royal Caribbean’s Freedom of the Seas ship, the operator says it will start rolling out the service now and aim to complete the process by the end of March next year.

“Our purpose as a company is to deliver the best vacation experiences to our guests responsibly, and this new offering, which is the biggest public deployment of Starlink’s high-speed internet in the travel industry so far, demonstrates our commitment to that purpose,” Jason Liberty, president and chief executive officer of the Royal Caribbean Group, said in a release shared on Tuesday.

And offering the kind of informal take that you’d expect from the boss of SpaceX, Elon Musk tweeted that Royal Caribbean ships were about to get a “kickass internet connection.”

SpaceX is also putting its Starlink internet service in the skies, too, with Hawaiian Airlines recently revealing it had signed an agreement with Musk’s company to launch the service for its airline passengers in 2023.

SpaceX is using a growing constellation of small satellites to beam Starlink broadband to Earth. To…